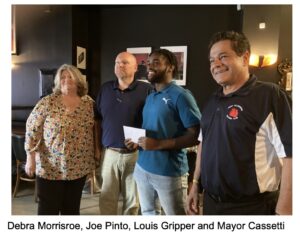 The Ansonia Rotary Club selected Louis Gripper Jr., a graduating senior at Ansonia High School, as its 2022 annual Scholarship Award winner.  Mr. Gripper was presented with a $1,000 check by Club member Debra Morrisroe and Club President Joe Pinto.  Mayor David Cassetti was on hand to congratulate the awardee. Mr. Gripper was selected because of his extensive community service and outstanding academic achievements. Graduating at the top of his class, the Ansonia High School valedictorian was accepted at 32 of the 40 colleges to which he applied. He will attend Emory University in Atlanta and study premed.

The Ansonia Rotary Club is currently planning to merge with the Rotary Club of Seymour-Oxford. It’s next meeting will be at noon at the Uptown Bar & Eatery on June 21. 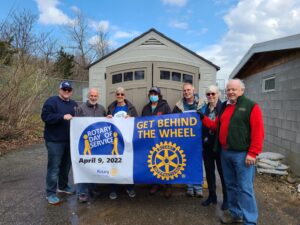 The Ansonia Animal Control facility has a new resource now – a storage shed for its supplies — thanks to the Ansonia Rotary Club, whose members brought their tools and skills to the Ansonia DPW complex on Saturday morning.  Past President Lori Veillette organized the local Rotary Day of Caring activity after Animal Control Officer Jeanie Roslonowski expressed the need for additional space at the facility to better organize supplies and alleviate overcrowding.  The Club used its funds to purchase the shed from Home Depot, which offered an excellent product at a discounted value.  Current Club President Joe Pinto supervised the shed assembly, which went smoothly despite periods of rain showers 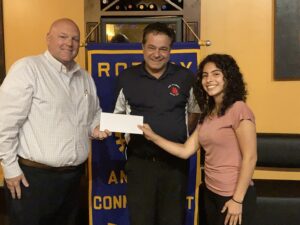 The Club selected Krystalee Fernandez as its 2021 Scholarship recipient, and presented her with a $1,000 check Tuesday at CRAVE Restaurant. Making the presentation was Club President Joe Pinto and Club member and Mayor David Cassetti.  Krystalee is a 2021 graduate of Ansonia High School, and plans to attend Framingham State University in the fall, where she will major in nutrition and play basketball. She excelled as point guard at AHS, and was a unanimous selection to the All NVL team this year and received the Dottie Shortell Award for outstanding Senior in the NVL.  Club members congratulated this outstanding young woman, and visited with her and her family during lunch.

Restaurant Raffle is a Huge Success! 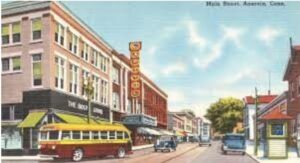 Club President Joe Pinto’s idea to host a fundraising raffle that would help Ansonia’s Main Street eateries enjoyed an amazing result, one that will support the Club’s community activities and philanthropy for the remainder of the year. Tickets sold were 235 out of a total of 250, 118 of which were on line. Great personal sales came from City Hall, with Judy Nicolari and Mayor David Cassetti setting the Club record in that area. Remarkably the winning ticket, drawn from a bin at Crave Restaurant on July 20, was purchased by Judy. Another winning ticket went to Kurt Miller, the City’s Finance Director. Tom Biggs, of the Fire Department, also won a $100 gift certificate. The remaining $100 prizes went to: Cathy Norton of Seymour, Patti Nicolari of New Haven, and Jolene McAllister of Ansonia. Participating restaurants were: Crave, Copper City Bar & Grill, Relish Wine Bar & Grill, Massimino’s Pizzaria, and Bangkok Room. Proceeds will benefit the Club’s community programs: the third-grade Dictionary Project, an annual Community Services Awards event for first responders, and the Annual Academic Scholarship for a graduating senior, as well as help continue the world-wide fight against polio. We thank all who supported the effort and our local restaurants 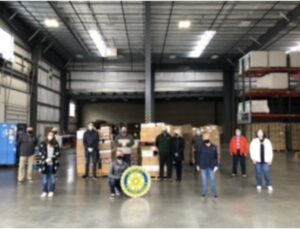 The three Valley Rotary clubs secured $6,600 in Rotary International District grant funds to purchase food for our five area food banks. The funds were supplemented by TEAM Inc.  Area Rotary Club members and TEAM staff transferred the food stocks into food bank vans last Friday morning at Contractor Nation, aka Basement Systems, which permitted the use of one of their warehouses for the transfer. The food supplier was Bozzuto’s Inc. 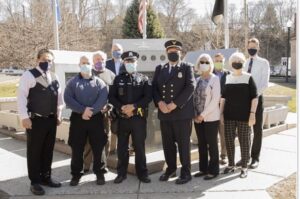 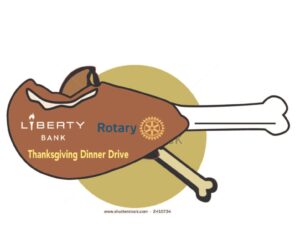 Ansonia Rotary  teamed up with Liberty Bank to raise funds for food banks in Ansonia for the Thanksgiving holiday. 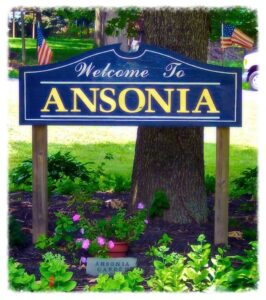 In the Spring, the Ansonia Rotary Club replanted flowers and groomed the bushes and shrubs at Haddad Park in downtown Ansonia at the corner of Bridge and Main Streets.  The Club adopted the spot last year, and has been responsible for keeping it looking well ever since.

Lori Veillette handed off the presidency of the Club to Joe Pinto in June, and they arranged for $2,500 of groceries to be delivered to the Samela Food Pantry at Christ Episcopal Church. Funds for the purchase were via a grant from the Rotary District Foundation, and the delivery was arranged by Presidents David Morgan of TEAM Inc. and Patrick Charmel of Griffin Hospital.  In addition, Joe purchased $500 of food for the Assumption Church pantry through a second Rotary grant.

The club normally meets for lunch at Crave Restaurant every other Tuesdays at 12:00 PM. Call Joe Pinto for more information, 203-623-1105. 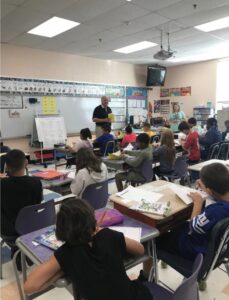 Every third grade student in Ansonia received his/her own personal dictionary last week compliments of the Ansonia Rotary Club.  The purchase and distribution of dictionaries to third grades has been an annual tradition of the Club dating back at least twenty years. Club President Lori Veillette, Secretary Robert Rose and Principal Liz Nimons assisted with the distribution at Mead and Prendergast Schools, respectively. According to Prendergast Principal Liz Nimmons, teachers look forward to the additional resource each year at this time. 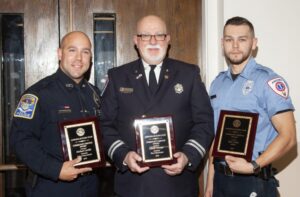 Fireman Edwin Sturgis, EMT Tyler Smith Police Officer Michael Castillo were feted with dinner at the Parish of the Holy Rosary Tuesday evening. Each awardee was chosen for his outstanding service to the community and his department over the past year. The dinner was organized by the Ansonia Rotary Club with support from the Valley Community Foundation and Liberty Bank. City and local officials, Rotary Club members, friends and family of the City’s police, fire and emergency medical departments all joined to applaud the awardees for their recognition. 2019 is the twentieth year that the Rotary Club has hosted the annual public service event.

Club President Lori Veilette introduced Mayor David Cassetti, who in turn introduced each awardee for his meritorious service and presented each with a plaque. In his introduction, the Mayor explained the basis for each selection. State Senator George Logan and State Representative Kara Rochelle also presented each awardee with a proclamation from the Connecticut General Assembly in recognition of their exemplary service.

Fireman Ed Sturgis has served the Webster Hose Co. for over forty-five years, initially as head driver, and more recently he has overseen the development and installation of comprehensive software as well as the automated alarm system. Both EMT Smith and Officer Castillo were cited as outstanding role models and for their assistance in developing and implementing training for other members of their departments. 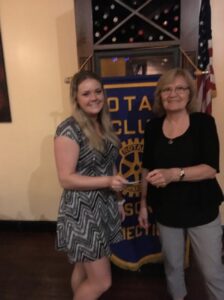 The Ansonia Rotary Club selected Kaitlyn Caple, a graduating senior at Ansonia High School, as its 2019 annual Scholarship Award winner. Ms. Caple was presented with a $1,000 check by Club member and Education Committee Chairwoman Cheryl Biros. Ms. Biros, an agent with Ned Miller Insurance/Starkweather Shepley, noted that Ms. Caple was selected because of her academic and social achievements. A member of the Valley United Way’s Youth Leadership Council, she has volunteered for numerous projects including the local Taskforce on Hunger, giving her time to many nonprofit efforts over the years. A native of Ansonia, she will matriculate to Catholic University in the fall, where she will be one of only two women who has selected an engineering major. Her affinity for mathematics attracted her to the combination of manufacturing and computer technology, which she observed in practice while shadowing a family member in California. She hopes to perhaps hold a similar role in the future, managing technical projects in the corporate world.

Members of the Ansonia Rotary Club could be seen this summer trimming rose bushes and planting flowers in downtown Ansonia, dressing up the pocket park named after Dr. Fred Haddad at the corner of Bridge and Main Streets. Passing drivers gave the thumbs-up sign and honked horns in approval of the change in appearance. City Director of Constituent Services, Greg Martin, also stopped by to add his former Ansonia Garden Club. As the Ansonia Rotarians had installed a tower clock in the park years ago, it seemed only fitting to Club President Lori Veillette that the Rotary club invest some of its time and resources into improving the appearance of this downtown green area. Next step for the park will be the engagement of a professional clock repairman to estimate repairs needed to the tower clock.